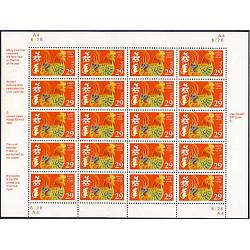 #2720 Year of the Rooster, Sheet of 20 Stamps Perforation Variety